Despite archeological evidences of early neolithical inhabitation dating back to 5000BP, the territory of present-day San Patricio was first extensivelly occupied by the Mixtuptecan peoples circa 3000 BP. This ethnical group, related to the Mezapatani of Porto Capital, was also joined by small ammounts of the Extremans from Fiarria and peoples from Uudangwuu. Together, these early populations built several large empires and nation-states over the course of nearly three millenia.

Starting on 150BP, several foreign colonies were established in San Patricio. Lendian colonists settled on the eastern coast, joined by Cruisanans on the west. Velika Morava, a kingdom in present-day Akitania Berria, settled Mudyar-speaking colonists in the southwest of the Bay of Patrick, while Manahata Island became a colony of Angliya. The local states and the colonies were incorpored into the expanding Maurestani Empire during the 50s-70s AP. Sanpatrician territory was distributed into the new Maurestani provinces of Zab, Mzab, Grand Sud, Djurdjura and Chelif.

From 193 to 202, San Patricio suffered with the Trails of Blood, the forced expulsion of native peoples (mostly Mixtuptecans, but also Mahliks, the nomad Maurestani peoples of the desert) from their lands.

By the late 3rd Century, a series of economical, political and social crisis hit Maurestania, culminating into the Maurestani War of 299. Most of San Patricio was quickly secured by a number of rebel forces and movements. Some groups such as Daniloland and Rogeslandt were early on defeated by forces loyal to the Empire, while the liberal Brolecia movement, based on Liston (nowadays part of the Listonian Free State), managed to hold ground, aided by ethnic militias and defecting military units.

The war ended on the 13th of May 299, with the withdraw of Ordlandic-Maurestani forces. San Patricio declared its independence on that same day. This was ratified by the Joint Election Comission (JEC) referendums on the 3rd of June, which confirmed the peoples' will of forming the independent Union of San Patricio. The old Maurestani province of Zab was initially placed under temporary UNV administration, until it too was handed to San Patricio on July 299. On that same year, following the fall of Wwww, San Patricio experienced a small expansion on its southern territories.

On January 14, 320 (14 de Enero del 320, in San Patrician), Juan Pablo O'Gorman O'Driscoll, the Da, announced an agreement with the Prince of Nova Luxa, Don Emanuel Victor Sergio, by which the Principality of Nova Luxa will accede to the Union as "El Sexto Pueblo" (The Sixth People), with equal rights and representation in the Union's governmental assembly.

On the same day, the Da announced the Union's exit from the Altlandic Family of Nations, of which it had been an Associate Member. The disengagement was agreed with the Kingdom of Altland, to be effective from February 1, 320.

The topography of San Patricio is varied. The estern and eastern lands are marked by high mountain ranges (Sierra Sagrada Occidental and Sierra Sagrada Oriental). The northern tier of the country is strongly influenced by the Bay of Patrick, a body of water notable for both its surface area (124.000 km²) and its volume (average depth of 80 m). East of the bay spreads a broad coastal plain, the many farms of which depend on the waters of the massive Rio Amplio river system. Extensive forests and savannas occupy the center of the country. Much of the southern, equatorial region consists of the northernmost sector of the Great Melanian Desert. Recent research indicates that what is now seared dryland was once the site of a vast inland sea, whose transmuted flora and fauna now provide San Patricio with the largest petroleum reserve in the new continents.

The climate in most of the nation is tropical. Temperatures at sea level rarely fall below 21 degrees celsius. There is a general tendency to higher temperatures and less moisture as one moves inland toward the equator. Prevailing winds from the northwest assure annual rainfalls of 70 cm or more near the coasts. Meanwhile, the arid lands of the extreme south can average fewer than 5 cm of rain per year.

The national territory is divided in five Homelands, the traditional territories of the major ethnic groups (McBoyo, Manahatas, Mahliks, Mudyars and Mixtuptecans). Though all Sanpatricians have rights to live and work anywhere in the nation, title to land in the Homelands may be held only by duly-registered members of the relevant nationality.

Per the agreement between San Patricio and Nova Luxa, the territory of the Principality will be integrated into the Union as the sixth Homeland, with the same basic rights and duties of the other five.

San Patricio is a republic. The current constitution is dated 299. Supreme executive, legislative and judiciary power is vested in the Consejo de los Veinte (Ingallish: Council of Twenty). The council consists of fifteen members who serve five-year terms and five members who serve for life. The five-year members serve staggered terms; each year three new members are chosen by the national electorate on a proportional-representation ballot. The members for life are chosen by voters within each of the five Homelands. The council shall be renamed Consejo de los Veinticuatro (Council of the Twenty-Four) once the accession of Nova Luxa to the Union is completed.

The Council also elects a non-Councilmember citizen to the position of The Da, whose term is until death or the age of 80. The Da represents the state at official occasions, speaks for the state in all dealings with foreign powers and is assured of hosting a late-night program on national television. The first Da, Juan Pablo O'Gorman O'Driscoll, has served from independence to date.

The flag of San Patricio is made of vertical purple, yellow, white and green stripes. The first purple stripe, by the hoist, features an image of the seven-star Shepherd's Crook, the brightest constellation in the equatorial sky. The stars symbolize Saint Patrick, the patron saint who lends his name to the country.

According to government sources, he Shepherd's Crook is placed within a vertical stripe of purple, symbolizing the ample and glittering nightsky above San Patricio. The thin stripes of yellow and white symbolize the riches of the land and the pristine beauties of the shore, respectively, while the broad stripe of green stands for the forests of the country. The second set of thin stripes of white and yellow symbolize the need for vexillogical symmetry, while the final stripe of purple by the fly symbolizes the centrality of water to the national identity.

Other national symbols include the country's coat of arms, the national anthem Cuando Calienta El Sol (Aqui en la Playa) and the motto (Es Buena la Patria, Verdad?). The six Homelands also have their own flags, with Nova Luxa the latest addition, following a redesign by the Prince, adopted by the Consejo de los Veinticuatro on June 19, 320.

Flag of the Mahlik Homeland

Flag of the Manahata Homeland

Flag of the McBoyo Homeland

Flag of the Mixtupteca Homeland

Flag of the Mudyar Homeland 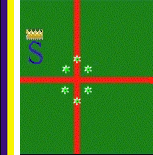 Flag of the Nova Luxa Homeland

Apart from significant Cruisan and Mounist minorities, the major religions of the country are the native faiths of Fatalism, Animism and Alcoholism.

Sanpatrician and Ingallish are the state languages of San Patricio, used by the government for official communications and taught in all schools. Within the designated Homelands, the five ancestral languages (McBoyo, Mixtuptecan, Mudyar, Malik and y'Mothah) may be employed for local public services. There are also small groups of speakers of Arosian, Maurestani and Mezapatani.

The five main ethnic groups of San Patricio are the McBoyo (descendents of the Cruisanan settlers), the Manahata (descendents of the Liliance-speaking settlers from Anglyaa), Mudyars (descendents of Mudyar-speaking colonists from nowadays Akitania Berria), the Mahliks (the Maurestani nomad tribes and urban populations of the southern deserts) and the Mixtuptecans (descended from the great migration from the original homeland of Xochimechatl).

Traditionally an agrarian society, San Patricio employs roughly 40% of its adult population in agriculture, fisheries, and food processing. The country is self-sufficient in most basic foodstuffs and still derives almost 28% of its foreign exchange through the export of organic fruits and vegetables and various wines and liqueurs.

Most foreign exchange is earned by the sale of energy products, either crude oil from the Far South or various "state of the art" solar photovoltaic systems from the San Mateo/San José district of the Patrick Bay Area. Tourism, particularly in the mountainous northwest and in the sometimes shocking "entertainment zone" of Puerto Bravo, is an increasingly important source of jobs and revenue.

San Patricio is also home to a burgeoning business-services sector.

Following the Maurestani War, the Da announced the explicit neutrality of San Patricio. Nowadays the country mantains a small army, navy and air force for mostly ceremonial purposes. The Navy continues its tradition of conspicuous chivalry and steams the "Great Green Fleet" around the Melanian Sea as a demonstration of regard and affection for San Patricio's maritime neighbors.

San Patrician land forces are composed entirely of The Da's Own Rifles (Los Rifleros Federales), an elite corps of marksmen. Other important part of the Sanpatrician defenses are the Great Shore Batteries, a set of 15km-range guns mantained by the Navy. Currently, the system houses the largest artillery pieces in Vexillium.

The government, however, prefers to keep most information about regular Sanpatrician forces as a state secret ("dentro del cerebro").

Community content is available under CC-BY-SA unless otherwise noted.
Advertisement