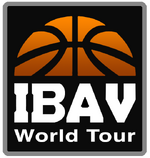 The IBAV World Tour is a worldwide men's basketball tournament promoted by IBAV, the International Basketball Association of Vexillium. The first international basketball tournament to take place outside an edition of the Vexgames, the main feature of the IBAV World Tour is that, instead of relying on a single host country, matches take place in different nations simultaneously - thus drawing a truly international audience to the arenas and to different media outlets.

The twenty IBAV Tier One teams participate in each edition, playing against each other once over nineteen rounds. The top-eight teams then advance to single-match quarterfinals, then semifinals and a grand final. The bottom six teams are then relegated to the IBAV Tier Two and participate on the next season of the IBAV Open Circuit.

Retrieved from "https://vexillium.fandom.com/wiki/IBAV_World_Tour?oldid=30060"
Community content is available under CC-BY-SA unless otherwise noted.