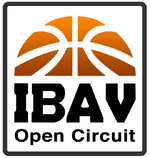 The IBAV Open Circuit is a men's basketball tournment organized by IBAV, the International Basketball Association of Vexillium. The tournment occurs every year during the second semester, involving the national teams in IBAV's Tier Two classification, including the bottom-six teams of the previous edition of the IBAV World Tour. The six best-placed teams on the Open Circuit guarantee a spot on the next season of the World Tour.

Retrieved from "https://vexillium.fandom.com/wiki/IBAV_Open_Circuit?oldid=30251"
Community content is available under CC-BY-SA unless otherwise noted.