Giuzza[1] is an island located in the Cislendian Ocean, off the eastern coast of San Patricio.

Originally inhabited by scattered bands of natives, related to the Mixtuptecan peoples of mainland San Patricio, the island of Giuzza and surrounding islets were used between 300BP and 150BP by Longerathian privateers. The first recorded expedition from the Old World, as part of the colonization of the New Continents, was led by Samuelonian captain Edward de Rivers, who landed on the island in 298BP. De Rivers returned in 291BP and established the short-lived colony of Stormshaven, near present-day Mizerti. Stormshaven lasted for a mere twenty years, before succumbing to native attacks and local diseases, while the few hundred surviving colonists were evacuated to Longerath.

Another - this time more succesfull - attempt at colonization was undertaken by Samuelonian Papaists in 128BP, under Lord Hugo de Gius, who founded the Gius Island Company. The settlements of Giustown, Refuge Bay and King Francisco Bay were established and flourished as integral trade stops.

As contact with Longerath mostly ceased during The Plague, Samuelonian control lapsed and actual political power devolved to local landed aristocrats, who established their own patchwork of neofeudal domains, occasionally warring against each other over control of trade and land.

The island was conquered by the expanding Empire of Maurestania in about 70 AP. Despite being governed as part of the Province of Zab from Nova Luxa, Giuzza had a varying ammount of autonomy under Dukes of the local noble houses.

On June 299, following the Maurestani War of 299, Giuzza became a constituent part of the Empire of Maurestania under Ordlandic Protection - despite opting-out of the protectorate on the 26th of August 299, joining Morania as the province of Gius, and rejoining the protectorate in October. Since then, Giuzza has been in practice governed as an overseas province of Ordland.

On June 300, there were serious protests in Giuzza, after Ordland imposed an Ordlandic Army officer, John Glideswell-Oliveira, as the new Duke of Joos, following a local succession crisis.

Starting on December 313, Giuzza has been claimed by the nearby Burovian dominion of Uudangwuu - although no actions have been taken to assert these claims.

As part of the Ordlandic Protectorate, Giuzza is not a completely sovereign nation. Foreign affairs, defense and certain economic matters are under responsability of Ordland. Excessive meddling by Newton on local Giuzzan affairs occasionally lead to protests.

A direct-elected governor (since 314, Osmar Totò, of the Agrarian Centre Party) oversees most of the internal matters of Joos, together with a 14-member Chamber of Deputies.

The Duke of Giuzza, oficially the Head of State of the island, has since 299 been relegated by Ordlandic authorities to mostly ceremonial functions. Historically the ducal crown has belonged to a number of local noble houses, such as the Gonzaga and the Fiume and, since 271, the Villagrán family.

The current (since the 12th of November 316) Duke is His Grace, Don Federico di Villagrán, a strong advocate for increased autonomy for Giuzza.

Giuzza is divided in ten Circumscriptions (Circoscrizioni) which, despite following mostly the traditional borders of old feudal manors, do not have major powers assigned to them - they serve as electoral districts, while a Governor-appointed Circumscription Board (Consiglio di Circoscrizione) oversees and advises budget allocation for certain areas, such as health, education and transport infrastructure within each Circumscription.

Local government power rests on the more than one hundred Communes (Comuni), each comprising one main city and, in certain cases, nearby minor villages. Each Commune is ruled by a direct-ellected Mayor (Alcalde) and a direct-ellected Commune Board (Consiglio Comunale), which may comprise anything from five to twenty members. The minor, non-incorporated villages may also establish their own Parish Boards (Consiglio di Parrocchia).

Elections for Governor and the Chamber of Deputies occur every four years. Deputies are chosen on a basis of one for each of the ten Circumscriptions, and the four most voted from Giuzza at-large - excluding the candidates which were the most voted in their own Circumscriptions.

Most political parties from mainland Orland have branches in Giuzza, although some local parties also exist, such as the National People's Front of Joos, the Workers' and Peasants' League, the Liberal Party of Joos and the Independence Party.

Giuzza is located in the Cislendian Ocean, to the east of San Patricio and north of the Burovian Realmsdominion of UudangWuu. The Duchy comprises one main island, the Island of Giuzza itself, as well as several nearby islets, rocks and reefs, such as Isola Veneda, Isola di Sal and the Timogli-Mogli archipelago.

The official flag of Giuzza is a 5x3 horizontal tricolour of murrey (RGB 120, 30, 105), black and white. Black and white are the historical traditional colours of the Maurestani Empire, while murrey/purple stands for the House of Villagrán. A variant of that flag, defaced with the Duchy's coat of arms, serves as a personal ensign for the Duke. 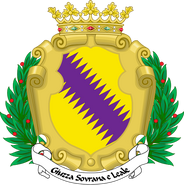 Greater coat of arms of the Duchy of Giuzza - usage reserved for the Duke and the local government.

Lesser arms of Giuzza, for use in non-governmental documents such as diplomas, etc.

The island's economy is primarily pastoral. The House of Villagrán owns more than 40% of the fertile and pasture areas in Giuzza, which has also attracted criticism from several pressure groups and popular movements which advocate for land reform.

The economy is complemented by a small ammount of ecotourism and gambling establishments - the cassinos in nearby Nova Luxa attract much more tourists every year, however. Most of the beaches, despite being too rocky, are a worldwide-known paradise for surfers and scuba diving.

The historical city of Refugio is an important harbour and ferry terminal, with several daily passenger services to Nova Luxa, Gran Puerto Petrolero (San Patricio), Tumini (Tumicki) and Izmith City (Uudangwuu). The island's only major airport is located in the capital, Joostown.

A local variation of Zartanian football, called giuoco pugno, is the most popular sport in Giuzza. Professional play is based around an eight-team league, Lega Giuzzanna di Giuoco Pugno - normally translated as the Giuzzan Football League. One team from Giuzza, the Refugio Tricolores, plays on the international conference of Zartania's Izgara Lyga Royale.

Other popular team sports include football (calcio) and basketball.

Community content is available under CC-BY-SA unless otherwise noted.